Woodrow Wilson - Pawn Of The Jews 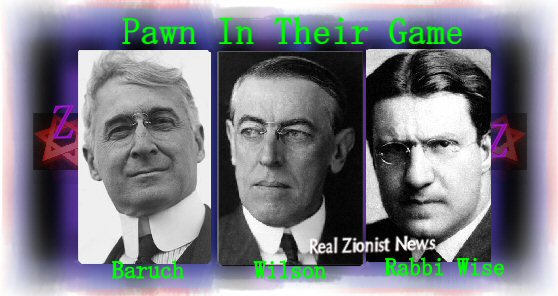 WOODROW WILSON
PAWN OF THE JEWS

THE ZIONIST PLAN TO DOMINATE AMERICAN LIFE was already in motion by the early 1900s.

A central Bank, legislation for an income tax, and American involvement in a world war, were on the Zionist list of “things to do.”

The key Jewish players, -1- Jacob Schiff, head of Kuhn Loeb Bank; -2- Paul Warburg, brother-in-law to Schiff; -3- Bernard Baruch, a leading Wall Street mogul; -4- and Edward Mandell House, (originally “Huis”), who negotiated cotton purchases in the US for the Rothschilds, only needed a pawn in the White House to bring their Zionist plan to fruition.

In 1910, the four Zionist leaders found their man, (a man of compromised morals known as “Peck’s Bad Boy”), in Professor Woodrow Wilson, recently retired as president of Princeton University.

Already established as a “political academic” and with an opening in the Democratic party for the governorship of New Jersey, Wilson was financed by Jacob Schiff, Paul Warburg, and their fellow Jewish associate, Henry Morgenthau, Sr., to seat him as New Jersey’s Governor in 1911.

Amongst the Zionist coterie and acting as the spokesman for Jewry’s political interests, one Rabbi Stephen Wise, founder of the Federation of American Zionists in 1897 and later to become Wilson’s most trusted advisor, with secret knowledge told a New Jersey audience that Woodrow Wilson “would be elected US President” in 1912 and “serve for two terms.”

In his autobiography, “Challenging Years,” Rabbi Wise boasted “that an immensely influential hidden power” — with which he was intimately acquainted — “had chosen Wilson as a major pawn in their political game” even before the president of Princeton University entered politics.

INCUMBENT US PRESIDENT WILLIAM TAFT had rankled the Zionist political manipulators when he refused their request to cancel the Most Favored Nation Treaty with Tsarist Russia.

Although later caving in to the Jews, Taft was seen as an unwilling player in the Zionist game of political maneuverings.

With a plan to get rid of Taft and preparing the way for Wilson’s presidential campaign in 1912, Jacob Schiff and friends formed the Bull Moose Party. They persuaded Theodore Roosevelt, retired from politics, to bleed off Taft’s votes by running for US president as head of their newly formed party. A “split ticket” insuring Wilson’s success was the Zionist design.

The scheme was put into effect by having Felix Warburg finance Taft while Paul Warburg and Jacob Schiff provided the funds for Wilson. Roosevelt, by virtue of his popularity, would carry his own votes.

It worked. The Zionists split the Republican vote between Roosevelt and Taft, and Woodrow Wilson became the 28th President of the United States polling only 42 percent of the popular vote.

With their man now in the White House, (a man of compromised morals), the Zionist plan for a central bank; renewed legislation for an income tax - (abolished in 1872 after it had been employed to finance the Civil War ); and American involvement in a global war, was a fait accompli.

PAWN OF THE JEWS

UNDER THE CAMOUFLAGE of politically acceptable verbiage so as to avoid the mention of centralization, one of Woodrow Wilson’s first acts as President was to promote a central bank under the appellation, “Federal Reserve Bank.”

On June 23, 1913, Wilson initiated a special session of the 63rd Congress to vote on the “Federal Reserve Act,” a piece of legislation bought and paid for by Zionist intrigues. It was on December 19, 1913 that Wilson pushed the bill through the Senate while most members were home for Christmas.

Operating as agents for “Lord” Nathaniel Rothschild, the monetary resources of America were now in the hands of three Jews: Jacob Schiff of Kuhn, Loeb Bank; Paul Warburg, appointed by Wilson as the Fed’s first chairman; and George Blumenthal, a high official of JP Morgan. Henceforth, the “Treasury” of the United States would forever be in the hands of the Jews. 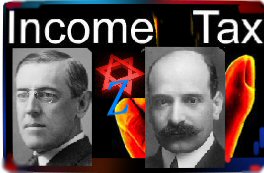 A private Jewish banking consortium that was neither “Federal” nor with any “reserves” was now established in Washington thanks to the Zionist patsy in the White House, Woodrow Wilson.

Printing money with no hard currency backing - along with interest bearing loans to the US government - a means was devised for the federal government to pay off the Jewish loan sharks.

Under his “New Freedom” program, Woodrow Wilson brought the American people under abject slavery with his 1913 Federal Income Tax amendment to the US Constitution. Along with the 16th amendment came the ratification of the IRS, installed as a division of the US Treasury Department.

Prior to Wilson’s robbing of the American people, an “income tax” was declared by the Supreme Court in 1894 as “unconstitutional.”

But being under orders from his Jewish patrons, Wilson cast all constitutional caution to the wind. Usurping the Supreme Court ruling with the 16th Amendment to the Constitution, Wilson imposed a graduated income tax beginning with 1 percent tax on earnings above $3,000 and gradually moving up to 7 percent on higher income levels.

By 1916, the top rate was more than doubled from 7 percent up to 15 percent. The rest is “graduated” Jewish history as we all too very well know.

ALL THAT WAS LEFT FOR WILSON TO ACCOMPLISH for his Zionist enablers was to usher America into a global war, thus creating a central tyranny for the Jews to rule from.

This despotism over the American people began with Wilson’s appointments to the War Finance Corporation, established to control the finances of US corporations essential to the war effort.

The men now wielding power over America’s raw materials and economic life were two Jews (and forever after in the hands of Jews: Eugene Isaac Meyer Jr., an associate of JP Morgan; and Bernard Baruch, Wilson’s inside man.

Underscoring the advent of Jewish tyranny was Wilson’s appointment of the first Jew to the Supreme Court, Louis Brandeis, a fanatical Zionist. 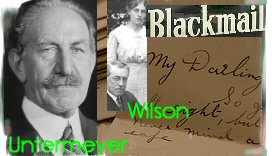 Shortly before his presidential re-election in 1916 under the campaign slogan, “He Kept Us Out Of War,” Woodrow Wilson received a Jewish visitor in the White House by the name of Samuel Untermeyer who helped finance Wilson’s presidential campaigns. Untermeyer was a prominent New York City attorney of the Law Firm, Guggenheim, Untermeyer, & Marshall.

Samuel Untermeyer produced a packet of letters written by Woodrow Wilson to the wife of a Princeton professor named Peck when they were neighbors at the university which established the scenario of an illicit relationship.

The New York lawyer informed Wilson that he had been retained by his former lover to bring a Breach of Promise action against the president.

But in lieu of commencing the law suit, Untermeyer told Wilson that his client was willing to accept $40,000 which would be paid for by “those who wished to prevent seeing the president complicit in a sex scandal.”

Henceforth, Woodrow Wilson was not just a willing puppet of Zionist interests but the sure and certain executor of a global war which was (as it was sold to the American sheeple) to make the world “safe for democracy” — but more assuredly — “safe for the Jews…”

And: Assassination Of President McKinley Was By Jews! Click Here