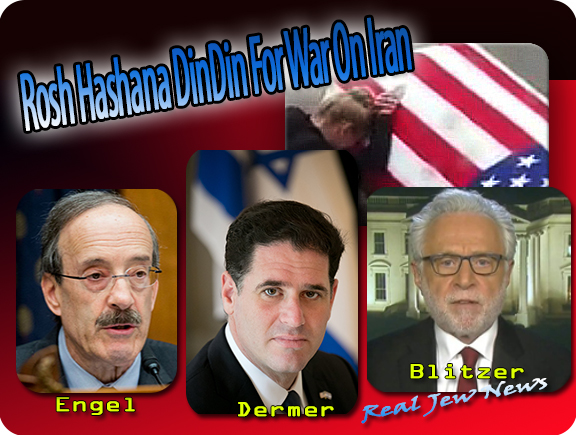 ‘ISRAEL SEES A CHANGE coming to the Iran deal that will fix it,” said Israeli Ambassador Ron Dermer to a group of Jews on Rosh Hashanah.

Lifting a toast to his fellow warmongers at his Maryland residence, Dermer proclaimed that Jews finally “have a voice” and can “sound the shofar!”

That shofar, suggests the ambassador, was sounded as a war cry for Israelitish battles against their enemies in days of old and remains intact today.

Trumpeting a renewed battle with, “The rising power of Iran poses a critical challenge for Israel which will act to prevent Iran from establishing a terror front in Syria,” Dermer drummed a coded message into the ears of a willing audience.

FOR WHAT DERMER MEANS is that America, NOT Israel, must expand its troops in Syria to “prevent” an Iranian presence.

“We hope the US will be more active in Syria. We are faced with Russians, Iranians, and also the Turks and Hezbollah. This is no simple matter to deal with.”

Of course not! Let the goys die young! Let America’s youth wage WW3 against nuclear-armed Russia and its allies in Syria to keep the Zionist project of Greater Israel afloat.

‘Send us your tired, your weary, your Gentile boys over here to do the dirty work for us,’ is what Lieberman is really saying.

The Amen Choir in DC will chant, “Jews! Jews! Our careers on Capitol Hill depend on money from fat cat Jews!”

And Sheldon Adelson, Paul Singer, and Bernard Marcus—Trump’s fat cat Jewish donors—will be looking for an Israel-First return on their investment.

And: Russia Beats US In The Middle East Here

And: Trump’s Jews And Generals Here

And: Why Israel Gets Away With Murder Here

And: Why Israel Is A Threat To World Peace Here